Todd is in the lineup as an athlete who swam for Firestone. Later, in China in 2007, Todd won four medals in swimming events at the World Special Olympics Summer Games. For you see, Todd has Down syndrome.

In 2012, the same summer Claude graduated from Firestone, our daughter Lyra was born with Down syndrome. She was less than 24 hours old when my obstetrician asked if I knew Todd Eisinger. I said I did not, for I had never learned the name of the young man in the photo at Firestone.

The first weeks of Lyra’s life were unsurprisingly intense as Max and I experienced a rush of emotions and concerns. We knew little more than anecdotes about raising a child with DS. But even more distressing were the eye surgeries Lyra underwent at 5 weeks and 6 weeks old to remove her bilateral, congenital cataracts.

Two months later, as I pushed Lyra’s stroller into a shop, a clerk spied a book on Down syndrome in the stroller’s basket. She enthusiastically asked me, “Does your baby have Down syndrome?” When I told her she did, the young woman said her cousin Todd Eisinger had DS and he just blew her away — there wasn’t anything he couldn’t do when he set his mind to it.

In 1982, Debby and Lee Eisinger brought a child with DS into a world very different than I did in 2012. Things have changed because of the Eisingers and other parents who, in the 1980s and ’90s, adamantly advocated for their children. Their persistent work made possible endless opportunities for people with intellectual disabilities where few had existed before.

Perhaps the most important change has been the inclusion of people with disabilities in all aspects of life, rather than sequestering them, as was the norm for far too long. Todd’s life and accomplishments are a testament to the value of inclusion.

In Akron Public Schools, Lyra attends a general ed classroom where an aide keeps her on task. Each day, one of the school’s interventionists (what we used to call special ed teachers) pulls Lyra from her classroom for additional instruction.

Students enthusiastically greet Lyra in the hallways and classroom, often stopping to hug her. Kids understand what many adults do not yet, which is children with disabilities are not to be feared.

Unlike when her brothers were 7 years old, Lyra does not receive invitations to birthday parties or playdates. And this, I believe, is the legacy of parents who did not grow up in communities where children with disabilities were included and who are, therefore, unsure of what inviting such a child means and how they will behave.

Study after study has shown that inclusion maximizes the potential of children with disabilities. But it also benefits the typical population. Spending time with people who are not just like you increases awareness of how little different they actually are. This is as true with physical and intellectual abilities as it is with race, gender, religion and sexual orientation.

At last summer’s National Down Syndrome Congress convention, joining a church choir was on a long list of inclusion opportunities. As longtime readers may recall, two years ago Max and I, who are practicing Buddhists, joined the choir at Westminster Presbyterian Church because our dear friend Jim Mismas, who had been the organist and choir director for 23 years, was retiring.

Last year, after our friend retired, we attended church services from time to time, visiting with parishioners we now call friends.

This year, Leif and Lyra are members of the children’s choir, and we are again regularly attending church. Max sings with the adult choir while I sit with Leif and Lyra in the pews. I love singing in the choir, but equally enjoy nestling with our children for the first part of the service.

When the children’s sermon is called, Lyra gallops down the aisle to the chancel steps. Then, after the short talk, the kids are dismissed for their choir practice, which Max also attends, helping Lyra learn the routine. 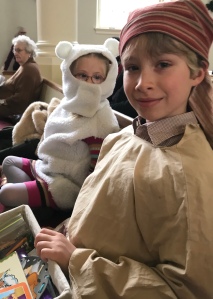 This month, Leif and Lyra participated in the Christmas pageant. During the first rehearsal, Lyra, in the role of an angel, fiddled with her halo until it broke. Rehearsing on the morning of the pageant, Lyra refused to stand to the side of the chancel with the other angels. She wanted to sit on the steps with the manger animals. And so, shortly before the performance, Lyra became one of them.

“Sheep! Sheep!” Lyra repeated in the pew before the service began, her fuzzy costume covering her mouth. Several parishioners near us giggled with delight.

I do not believe any one religion is exclusively right and all others are wrong. I do believe it is important to tend to the spiritual lives of our children. And so, because most Buddhist centers are not set up to accommodate children, for many years I took my sons to a Buddhist family camp in Vermont. And yet, while a lovely way to spend a week, it is an inadequate substitute for a local spiritual community.

In a recent sermon, Westminster Presbyterian Church’s pastor told his congregation that a welcoming community makes visitors return and become members. This Presbyterian church within walking distance from our home openly invites our slightly unconventional family to participate in warm and thoughtful spiritual practice. And it is a place where Lyra is not just welcomed but cherished by members willing to meet her where she’s at. It’s a blessing to us all.

This column was first published in the Akron Beacon Journal on December 29, 2019.