My first child was born shortly after I turned 28. Having learned nothing about babies in my own upbringing, I approached my new role like a college course I refused to fail.

Between the deficit of attention in my childhood and the fact that I waited until I wanted children before having them, I glommed onto attachment-style parenting, which was in high fashion in the mid-’90s.

Breastfeeding on demand and exclusively for a minimum of six months, infant massage, co-sleeping in a family bed, and carrying babies either in front or back packs are all part of the program.

Among the claimed benefits of attachment-style parenting is that children who are held close and have their needs easily met become independent, confident adults. Or, as my mentor at Ohio State once opined, “If you can’t let your child come to your bed when he is scared, why be surprised when he becomes a disaffected teenager?”

With their father seldom home, sometimes not living in the same state, the boys and I were like the coveys of quail I frequently see when visiting family in Arizona. The mother hen leads a line of chicks wherever she goes, her top feather bobbing up and down on her head like a conductor’s baton.

Most attached to me was Jules, my third son, whom we nicknamed “Barnacle Bob.” Born with a mild temperament, Jules accompanied me wherever I went. And though he quickly grew tall, his bones were like those of birds. So light was he, I carried him on my hip until he was more than 6 years old. 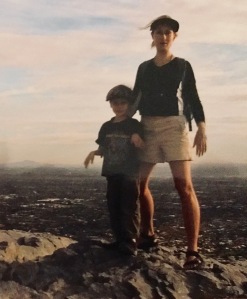 Before Jules was old enough for school, he’d quietly play with whatever was available when I met friends for lunch. “I just wanted to be with my mama,” he now recalls. Sometimes it was frustrating. Doctor’s appointments, for example, were tough because until he was about 7, he’d become distraught if he couldn’t stay right next to me on an exam table.

Because he was quiet, it was often easy to forget Jules was present, thereby allowing him to take in everything. He was the first of my sons to guess that Max and I were more than just friends, a fact that threw his older brothers for a loop.

Hugo and Jules came home with lice shortly before I gave birth to my first child with Max. Hugo willingly got a buzz-cut. Jules, who was 9 and had hair several inches past his shoulders, did not want his cut.

“If you want to keep your long hair,” I told Jules on a Friday in late January, “you’ll need to let me pick the nits outside every day until they are gone.” He agreed and the last days that he was my youngest child were spent with me holding him close as I groomed his head hair by hair.

When I labored with Leif a few days later, Claude and Hugo stayed in the dining room. Jules was beside me and when each contraction started, I touched him. He’d strike a meditation bell, signaling to the midwife, Max, my stepmom and two friends to be quiet. When the contraction ended, Jules hit the bell again.

During the many hours of labor, delivery and postpartum activities, Jules never left my side. 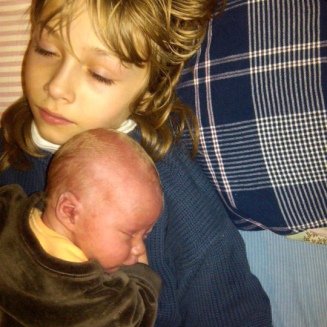 When I was pregnant with Lyra, Jules came to every important appointment. He was there when they told us her neck measurements were thick and that, combined with my age, meant she had a likely diagnosis of Down syndrome. He was there several weeks later when the next tests showed the fetus was a female and had no features indicative of a diagnosis. And Jules was with me when I birthed my final baby, Lyra.

A child cannot attach himself so intrinsically to his mother without a symbiotic development occurring, like the blood exchange that occurs in utero between fetus and mother.

Last August, Jules was diagnosed with mononucleosis. He had hoped to make the state cross-country championships this, his senior, year, but he was too weak to run. Now, seven months later, he’s still easily fatigued and recently saw an infectious disease specialist at Akron Children’s Hospital. He may have chronic fatigue syndrome.

And yet, without any help, Jules applied to seven universities. He’s been accepted by five and wait-listed by the other two. Only once did he give me an essay to edit.

“I figure I’m an adult now and need to be able to take care of things like this on my own,” he told me as I repeatedly begged to help him. He’s also worked on his own to find and submit scholarship applications.

Sheesh. How to make your mom feel like a potted plant.

Bittersweet describes my feelings when each of my sons has left for college. It signifies the beginning of a new era of adult children, which I heartily enjoy. However, never again will they be my little chicks. How dear to me now are the years when we were a covey.

In January, someone asked where Jules would be going to college and I surprised myself. I began crying in the midst of small talk. Barnacle Bob is detaching, taking with him a chunk of the mother ship.

This spring, Jules has lined up interviews with biology departments in other states for summer employment. Places where they are doing research not unlike what he’s participated in at the University of Akron as a high school student. He could leave in a little over two months.

The boy who was the baby of our family for nine years, who slipped alongside me like my shadow, is leaving soon, as he should. If you see me weeping in public this spring, as I have now many times, you’ll know why. Please be gentle with me. I have a wound where the child who attached to me so deeply has extracted himself.

This column was first published in the Akron Beacon Journal on Sunday, March 22, 2019.

View all posts by whoopsiepiggle

The Posts Hit Most