“She has an incredibly strong hunting instinct and you can’t change that,” my vet said. “One day, her instinct will override her training and it’ll happen so fast, there’ll be nothing you can do.”

I had asked the vet about Dorothy, our 1-year-old, 70-pound German shepherd and her obsession with our cats. Having tried everything, the vet made it clear there was only one decision, albeit hard, to make.

Last June, a month after we brought puppy Dorothy home, four tiny kittens marched out from under the porch of the house where Claude lives.

I drove over with Jules and Leif. Sure enough, when we pulled in the driveway, there they were: three white kittens and an orange one frolicking in the front yard. As soon as they saw us, they darted back under the porch. 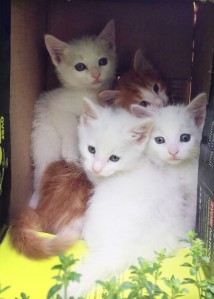 The underside of the porch is open but covered with lattice. I slid the lattice to one side and sent Leif, who was 7 at the time, into the dusty space. One by one, he delivered the kittens to us.

What to do with four feral kittens? The best we can, because feral kittens become feral cats, which have more kittens. One of a Kind Pets was so full it was not accepting even young kittens. Nothing to do but take them home.

With eyes still blue, they were between 3 and 4 weeks old. A good age to tame feral kittens. At home in our back garage, we placed them in a sofa box we’d been saving because how much fun is a box big enough to hold a sofa?

Two weeks later, we trapped two more kittens at Claude’s house (I’m his landlady). Again, all-white kittens, but one significantly larger than its buddy, who was slightly smaller than the first four.

Turns out we had two white mama cats in the neighborhood. We eventually caught and spayed both, thanks to One of a Kind Pets, which has a very affordable trap-neuter-and-release program for feral cats.

We quickly found a home for the largest of the six kittens. Claude said he wanted one, but I told him he must take two as I strongly believe, when possible, that pets should live with at least one other member of their species.

When they were old enough for flea treatment, the kittens moved into our basement laundry room. For weeks, I started my days by pouring a cup of coffee and heading down to the basement. When I’d open the door, the little kitten we took in last would stop playing and go hide. I named him Pipsqueak because he was so tiny and his meow sound like the noise from a squeeze toy.

Sitting on the floor with my back against our upright freezer, I’d watch the kittens chase each other, tumble and roll. Like Jane Goodall with her chimpanzees, I mostly observed my wild subjects. Soon, Pipsqueak would cautiously rejoin the kitten rampage.

Playtime ended with the kitties making their way to my lap. There they licked one another and fell asleep as I stroked them.

When I went back upstairs to start my workday, I often was shocked to discover I’d spent 45 minutes or more sitting on my laundry room floor. It was perfect meditation — I stayed completely in the moment when watching them.

In September, the kitties turned 3 months old. Claude took his two back to his home and we let the remaining three roam free in the house. Dorothy immediately began stalking them. We figured she needed some time to get used to these new creatures.

But time only deepened Dorothy’s obsession. She was not allowed on the second floor or the basement. None of my dogs are allowed in the basement, which is where the cat boxes are kept, because cat boxes are to dogs what open bars are to college students.

So long as they could stay up on furniture, the cats came into the same rooms as Dorothy. When one settled on a dining room chair, Dorothy often sat next to it, her face level with the cat’s, aching for it to make a move. Several times she air-snapped at them.

When she went outdoors, Dorothy could not wait to get back inside. She began jumping on the back door regularly and only moments after being let out.

She begged to be let in even when all of us, the people, were outside in the yard. To her, the cats were prey and as a predator, she could not “leave it” as we all told her repeatedly.

She forgot about the cats only when we walked in the parks. Watching Dorothy, solid and lean, gallop at peak speed across a field is a glorious sight. She’d then come slide her big head between my body and hand so I could rub her ears while telling her what a good girl she is.

After a family discussion in which we had to choose which animals to keep, I called the people we bought Dorothy from and told them what our vet had said. They quickly offered to take Dorothy back, but asked if I wanted the rag doll kitten they’d adopted last summer. Their dogs were on constant alert around the cat. “I’d never forgive myself if I came home one day and found the cat’s neck broken,” said the mother of the family.

I was relieved they understood exactly what we had been struggling with. I thanked her but said with four cats, we were maxed out. 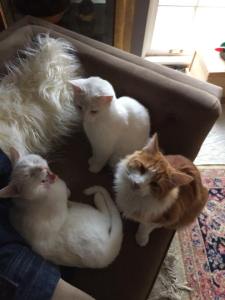 Good parents, like good pet owners, take into consideration what is best for each member of the family and the family as a whole. With divorce, relocating for jobs, choosing where and with whom to live, taking ego out of the equation isn’t always easy, but it is necessary. What is best for the children? Where will they thrive?

It may not be with you, and there is no shame in that.

I cried as I drove Dorothy to the breeder’s house. And I’ve cried since when I view photos of her playing happily with other German shepherds and bonding with one of the sons in her old, now new, family.

As much as Dorothy loved us, she is much happier in an environment where she’s not constantly struggling against her instincts.

This was first published in the Akron Beacon Journal on March 18, 2018

View all posts by whoopsiepiggle

The Posts Hit Most