Each December, I look forward to the frozen quiet of January.

Holiday décor goes back in boxes and the boxes go back on shelves in the furnace room. It’s a relief to reclaim the living room as adult space.

For arable farmers, at least in this part of the country, the fall harvest is put up and the spring planting is months away. Walk outside and winter seems to say, rest, try to rest.

I enjoy many of the trails in our parks, but hike the same one most days. Walking the same path day after day is a subtle gift. Skunkweed that fills coves in the spring is later replaced by wild columbine, which later still is covered over with fallen leaves and then snow.

For the better part of three months, when the temperatures are well below freezing, I rarely see another person on the trail. This is my reward for being undeterred by the cold. A forest muffled by deep snow when even the animals are quiet is a stark reprieve from the sensory clutter of modern life.

Until last week, this winter has been hearty, which is fabulous. The kids can ski and sled. The dogs don’t get muddy. And every night when the temperatures hover around zero, fleas, ticks and mosquitoes are exploding in their winter homes. Hooray! After last year’s balmy winter, we had to spend a fortune on flea and tick treatments for several months.

The epochs of my adult life can be divided by sets of dogs. First were Goldie and Alex, a shepherd mix and a sable sheltie. I got Goldie when I was 17 and both she and Alex died when I was 31 and the mother of two small boys.

Bruce Springsteen once said about having children, “You know, all of a sudden, your dogs are just gonna be dogs.” But those dogs adopted before I was a mother were the hardest to lose. They were my proto-children.

Next came Greta, another shepherd mix, and Hoover, my first tri-color sheltie. When young, Greta could pick off a chipmunk running up the side of a tree and shake it dead before I could holler for her to stop. Though past her prime when we moved to Akron, Greta still enjoyed darting after creatures, including bumblebees, then returning to me over and again.

As years passed, our walks became slower so Greta could keep up. One summer day, as I forged up a steep hill, I realized Greta was no longer with me. I turned and saw her lying on the trail 25 yards behind. I called to her and she looked up at me.

Greta was a smart dog and if you have ever had a truly smart dog, you know how well they can communicate. More than once, Greta woke me in the night, presumably to be let out. I’d walk with her to the door and open it only to find Hoover accidentally left outside. As he trotted in, Greta would lie back down on her bed.

That day on the trail, Greta’s eyes told me she wanted to come, but couldn’t. A dignified dog, she was also embarrassed.

I walked to Greta and helped her stand. She ambled a few paces before dropping back to the ground. Not as heavy as she’d been in her prime, she was still easily 45 pounds. I picked her up like a lamb, my arms around the tops of her four legs, her body on my chest.

I walked as far as I could and set her down. She walked as far as she could before I picked her back up. We repeated this until we crested the hill. Though she lived another year, that was Greta’s last hike.

After Greta died, I brought home Lily, my bi-black sheltie. Hoover was 9 and for the next few years, Lily kept him active. I would watch from my kitchen window as they sneaked up and chased each other around a row of privet.

“Please don’t be dead, please!” said all of us many times after Hoover, at age 12, went deaf. When asleep, he’d lie stock-still until touched, no matter how noisy we were.

That’s when Lily became Hoover’s assistant. When I’d call the dogs to come, Lily would dart to Hoover and let him know to look at me. He would, and then come running as best as he could on his arthritic legs.

I know it sounds like I’m anthropomorphizing my dogs, but dog owners understand it’s true. These pack animals work together.

Now 7, Lily’s the old dog. Angus, my second tri-color sheltie, and Dorothy, my big German shepherd, are barely out of puppyhood. It took Lily awhile to remember how to frisk. She’d lived with a senior dog for so long, she acted like one herself.

Creatures grow up and, if we are lucky, we grow comfortably old before we die.

Statistically, we know some of us will not be so lucky. Before 40, the deaths of friends are rare and often accidental. By middle age, illness, especially the Emperor of All Maladies, begins claiming a life here and there.

In Jules’ small classroom at the Waldorf School, two parents did not live to see their eldest children enroll in high school. The first died of melanoma, the second due to liver cancer. Both were in their 40s.

“To love one another, to have compassion even for those who would do us harm, that is the point.”

I turn in my columns on Tuesdays. Before these words from my last column were inked on newsprint, Sam, my friend for more than 40 years, had been killed.

Half an hour before she was shot in the chest, she told another friend she was going home to tell her husband of 33 years she was leaving him.

To lose someone prematurely to illness or accident seems unfair. But in the end, it just is. A death like this requires volition, actively choosing to end a life. The grief for a slaying victim defies acceptance because it didn’t have to be.

I made the three-hour trip to West Milton, Ohio, for the calling hours. Sam raised four boys to manhood, including her stepson. All four of them stood alongside their mother’s casket and comforted more than 100 people. Sam would be proud.

These young men, their wives and children, and Sam’s parents all need endless compassion as they face the months ahead, which includes a trial.

Back home the next day, a dry snow looked like the rice cereal I once added to my babies’ applesauce. It swirled around my boots as I walked across the field to the woods. The dogs barked and chased one another, delighted to be in the park. Delighted to be alive. 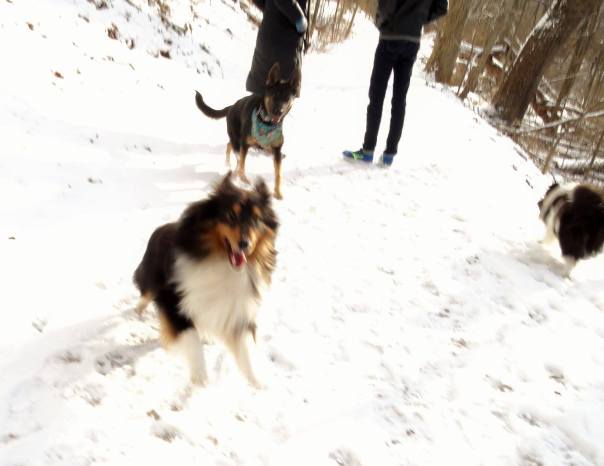 Nature Is What We See